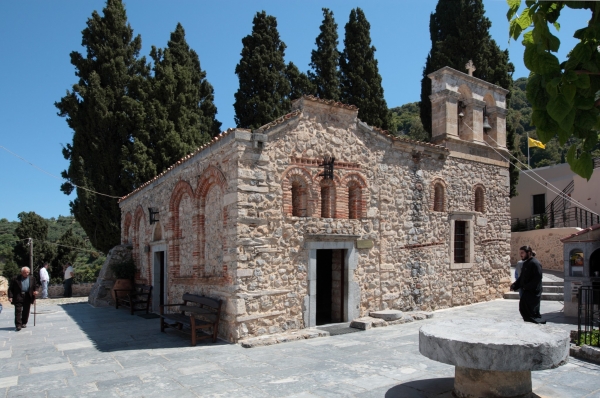 Driving southeast the road leads to Potamies. Near the village is an old monastery of Panaghia Gouverniotissa, dedicated to the Dormition of the Virgin and in which can been seen frescoes of the 14th century.

Continuing and near the neighborhoods of Ano and Kato Kera and in a superb setting with a beautiful view is the monastery of Panaghia Kardiotissa or Kera (Lady), dedicated to the Birthday of the Holy Virgin. In the monastery is kept an icon of the “Virgin Enchained”, believed to be miraculous.

We continue to the south passing through the village Pikiano, the road forks out, to the right and to the left, encircling the Lasithi plateau.

The view from the high up on the road is magnificent. The picturesque windmills work regularly to water the fertile plain, which covers as area of approximately 2500 hectare. During the period of Venetian rule and later under the Turkish occupation, the region was at the forefront of the resistance movement, with various uprisings starting from it.

It was also a place of refuge for those who were being hunted by the occupiers. As we continue our circle and pass through the villages of Kato Metochi, Aghios Charalambos, Plati, we come to Psychro, situated at an altitude of 840m. From here a road of one kilometer in length leads to a tourist pavilion and parking lot. If we take a footpath for about an other kilometer, we arrive at the entrance of the Diktaean Cave (The famous Diktaean Cave where Zeus is said to have been born), at an altitude of 1025 m. above sea level. Many mythological tales are associated with this dark, mysterious cave. From the archaeological finds, it has been established that this was a place of worship from Middle Minoan to Archaic times. An altar was discovered, tables for libation, numerous offerings, figures, weapons, double axes, clay pots, rings, seals, precious stones etc.

From Psychro the road leads east, towards Kaminaki, Aghios Georgios and the Kroustalliena monastery which is built on the eastern side of the plateau, on an imposing wooded hill. It is dedicated to the Dormition of the Virgin. The monastery, as is the case with others in Crete, played an important role, during the Turkish occupation, as a center of the revolutionary committee and as a school for the Greek children of the region.
In the last part we meet the village of Tzermiado which is the largest village of the plateau. In excavated sites near the village were found Neolithic graves and Minoan structures. In particular, on the peak of Karfi, to the north of the village, a Minoan settlement was uncovered. Among its findings was the statue of a goddess, about a meter height, which is now in the Heraklion Archaeological Museum. We continue towards Lagou and Pikiano, from where we return by the same road in a northerly direction.

On our way back leaving the Lasisthi Plateau we may visit the village named Krasi. At the top of the village there is a large water reservoir called “Megali Vrisi” by the local people. The water reservoir was built in 1890, as an inscription on it suggests. In front of the reservoir and after the asphalt street there is a small square with a centuries-old plane tree.

Returning from a different route in order to reach the main national road, we also drive through the village called Mohos, where just after we will have the chance to have a beautiful panoramic sea-side view of the well-known resort areas of Hersonissos, Stalis & Malia.

View the embedded image gallery online at:
https://www.creteprivatetours.com/tours/item/5-lasithi-plateau#sigProId11780bc7f4
back to top