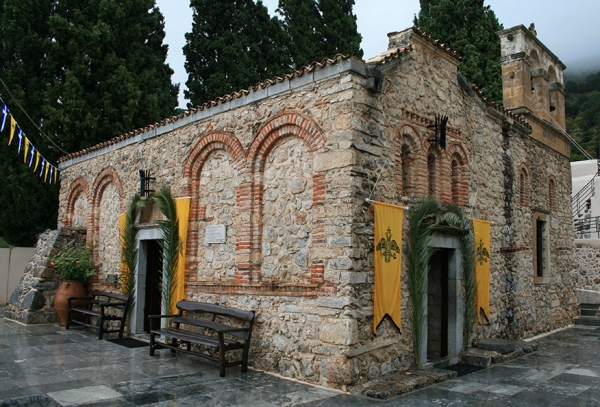 The foundation and the history of the monastery, the first mention of which dates to 1333 is inextricably linked to the wonderworking icon of the All-Holy Virgin the Kardiotissa [the type of icon where the Virgin holds Christ in her arms above her heart], which according to tradition was painted by St. Lazaros, a monk and icon painter who lived during the period of Iconoclasm.

The icon was stolen during the period of Venetian occupation and transferred to the church of St. Alphonse in Rome, while the newer icon that replaced it since 1735 is considered equally mira¬culous.

Of the original monastery, only the catholicon survives today which has been structured architecturally after successive interventions to the original single-nave church. The barrel-vaulted space to the north and the three parallel to each other spaces on the west side were added subsequently. The whole was united with the addition of the large transverse narthex. The sides of the narthex are of particular interest as they are structured according to the model of ¬Byzantine architecture with blind brick arcades and ceramoplastic decoration.

The original church has mural painting decoration of the characteristic style of the painting of the first decade of the 14th century. The iconographic programme shows a peculiarity as it only has seven scenes from the Marian cycle which also happens in the cases of other monastic catholicons.

View the embedded image gallery online at:
https://www.creteprivatetours.com/points-of-interests/item/37-holy-monastery-of-kera-kardiotissa#sigProId7d0b685cd4
back to top