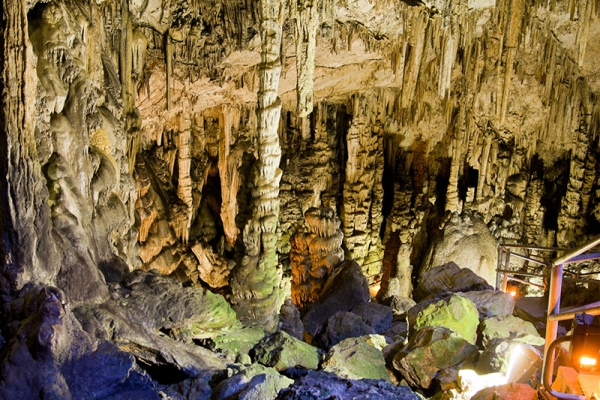 On the northern slopes of Mt. Dicte and the southeastern slopes of Mountain Sarakinos, at a height of 1,025 m, lies the Psychro Cave, also known as Diktaion Antron, an ancient site of worship and one of Crete’s most important and impressive Caves.

There are two paved paths leading up to the cave, starting from the parking area and passing through a dense forest that creates a green zone in this wild and rocky landscape. The discovery of the cave by villagers in 1883 attracted some of the era’s well-known archaeologists. Thus three years later, Federico Halbherr and Joseph Chatzidakis arrived and excavated a small area in front of its inlet, while at the same time gathering objects found by villagers.

In 1894, Arthur Evans purchased objects that had come from the cave; in 1895 he revisited the site and discovered part of an inscribed offering table, while in 1896 he carried out a small-scale excavation. The most interesting piece among the objects he gathered is a bronze sheet believed to depict all the elements of cosmogony. In 1897, the French archaeologist Joseph Demargne uncovered another piece of the offering table discovered by Evans as well as a gold diadem, of which up to now only its description is known. The most systematic research program held in 1899 by D.G. Hogarth brought to light finds dating from the Middle Minoan to the Archaic period (ca.1800-7th c. BC) – with the exception of a few sporadic down to the Medieval period objects – and proved Psychro Cave to be one of Crete’s most important sites of worship. The excavation started from the so-called Upper Cave, which rather resembles a rock-shelter and has no stalactites. It is 35 m wide and about 16 m in depth, and consists of two chambers, of which the first is completely open and well-lit. Here the sacred temenos, formed by an irregular enclosure and paved in places, was discovered. Within the enclosure, a rectangular rubble altar was identified and according to the excavator was older than the temenos itself.

Later on the Lower Cave was explored. It consists of five smaller or larger chambers with a small lake at its end, and has large, impressive columns of stalactites and stalagmites which in antiquity became objects of worship for pilgrims. Most of the bronze male and female figurines, bronze tools, knives, axes, razors, blades, seals and fibulae, all of which were votives offered by pilgrims who came even from distant lands to render honors to the deity, were found here. From the beginning of its excavation the Psychro Cave was associated with ancient tradition’s Diktaion Antron, where Rhea fled to escape Kronos (who devoured his offspring) and where she gave birth to Zeus, father of gods and mortals. The newborn god was nourished by Amaltheia, who was either a goat or, according to other ancient writers, a Nymph. To shelter the infant’s cries from Kronos, the Kouretes made noise by banging their weapons and dancing. According to other mythical traditions, the god was nurtured by bees, or doves, or a sow. Lucian tells us that after abducting Europa from Phoenicia, Zeus brought her to the Diktaion Antron. The ancient seer Epimenides was also said to have “slept” in the cave for many years and visualized some of his prophecies.

Today, Psychro Cave is also an interesting natural habitat, as it has been noted that various species of bats, among them the Mediterranean long-eared bat, nest in the chambers of the Lower Cave. There are also cave-dwelling arthropods, while numerous bird species find refuge in its entrance, just as they do in the Upper Cave.

View the embedded image gallery online at:
https://www.creteprivatetours.com/points-of-interests/item/29-diktaion-antron#sigProId26e9497238
back to top