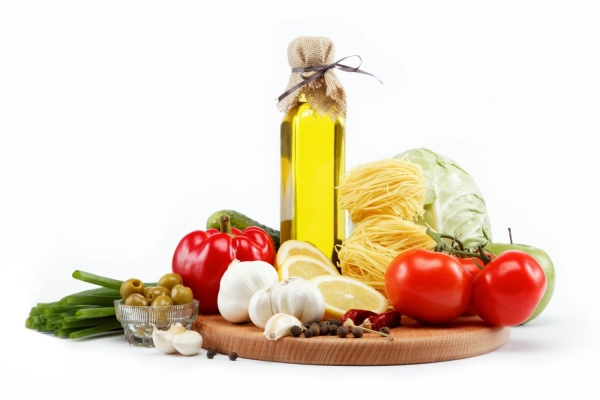 "Don’t look for a pill that can substitute for the Cretan diet. There is no such thing".

The Cretan Diet is the base of the Mediterranean Diet, as proven by scientific studies and documented by international literature.

Research results on the relation between nutrition and health confirm the superiority of the Cretan Diet in comparison to other dietary schemes of the Mediterranean and the rest of the world, in terms of its beneficial effects on longevity and chronic disease treatment (heart disease, cancer, obesity, diabetes etc.).

The "Seven Countries Study" has triumphantly proven the value of the Cretan nutrition and the importance of the foods of the Cretan dietary scheme (such as olive oil, plant fibers, fresh seasonal foods and vegetables, pulses) in the adherence to a healthy diet model, shielding the Cretans from the serious diseases of Western Civilization.

Today the Cretan Diet and the local products claim the position and the recognition they deserve. In view of continuous food scandals and the threatening dimensions of the harmful effects of the modern demanding way of life on human health, the adoption of the principles of the Cretan dietary pattern is deemed to be necessary, both for young ages and adults.

The Cretan Nutrition involves a general way of life and we should not ignore the factors that have probably contributed to its beneficial effects:

Today, promoting the superiority of “the Cretan dietary pattern” is a strong competitive advantage for Crete. As societies and economies develop, it is more important than ever that people inside and outside the island return to a healthy dietary pattern based on local, quality products, which constitute the healthiest nutrition worldwide.

The characteristics of the Cretan Diet

If we wanted to sketch a rough pattern of the Cretan Diet in the 1960s, we could say that the core of this diet consisted of food derived from natural sources, whereas food of animal origin was more peripheral in nature. In general, people consumed seasonal products, available in the wider local area, which underwent minimal processing or none at all.

Fresh and dried fruits, pulses, endemic wild herbs and aromatic plants, and rough cereals, whose cultivation was favored by the regional climate, were consumed in great amounts and constituted the base of the Cretan diet during that period. Dairy products were consumed on a daily basis in low to moderate quantities. Poultry and fish were consumed on a weekly basis in moderate quantities, whereas red meat was consumed only a few times a month. The main supply of fat was effectuated by olive oil, which was used not only in salads but also in cooking, unlike the northern European countries which primarily used animal fat.  Another essential feature of the Cretan diet in 1960s was the moderate use of alcohol, mainly red wine which accompanied meals.

Finally, the most common dessert was fresh fruits, while traditional pastry based on honey had been consumed a few times a week (Willett et al. 1995;Kromhout et al. 1989;Simopoulos 2001).

Differences compared to other Mediterranean Diets

The Cretan Diet of the 1960s has quite a few differences compared to other Mediterranean diets of the same period. More specifically, the study of Seven Countries has demonstrated that in Crete the consumption of olive oil, pulses, fruits and potatoes has been higher compared to the consumption of the same type of food in South Italy.  On the other hand, red meat, fish and cereals were consumed in smaller quantities (Kromhout et al. 1989).

Initially, the protective effect of the Cretan Diet for human health was attributed to its high monounsaturated fat content, due to the daily use of olive oil, as well as to low saturated fat, due to the low consumption of red meat. At present, we are well aware that this particular nutritional scheme possesses important additional features, since it is a diet that, when applied in sufficient quantities, provides all the necessary micro-constituents (i.e. vitamins and minerals), and is rich in ω-3 fatty acids, vegetable fibers, antioxidants and various phytochemicals, which have significant influence on several body functions, and a beneficial effect on our health.

For many centuries, the history of the olive tree and the olive-oil has been linked to the long history of Crete, an island where thousands of years ago the Western Civilization was founded, and European History started.

Numerous historians, based on archeological findings, refer to Crete as the homeland of the olive tree. It has been recorded that the olive-tree was originally cultivated around 3.000 Β.C.

In Knossos, the room in which they kept the oil press machine was located at the one of the central places in the palace; through pipes originated from that very room it was possible to deliver the fluid directly into the huge earthenware jars.

Production was held at organized installations within settlements, at the palace, and at the houses of the wealthy land owners, so that the communities would be supplied.

installations, inscriptions, signs and others; they all certify the eminent presence of olive trees and olive oil in Crete.

In Minoan Crete the peasants considered the olive tree to be very important, almost sacred, and not just because of its nutritional value; olive oil was also used as perfume-basis, as holy oil in offerings to goods, in medicine and in witchcraft, as lubricant for tools, as fuel for lightning, in sports and for the embalming of the dead.

This kind of worship and protection apparently secured the survival of the sacred tree in the island, and in return it never ceased to serve as a major economical resource.

In ancient Greece, Dioscurides and Diocles praised its therapeutic properties, made a science

out of it while Solon was the first to legislate for the protection of the olive tree, by enacting laws that did not allow more than two trees in an olive grove to be cut in a year.

This sacred tree and its blessed fruit, worshiped for thousands of years, and becoming the living

legend of civilizations, upon which myths, traditions and rituals were created - is highlighted and

recommended by contemporary science as a major factor in health and longevity.

The history of wine in Crete is as old as Cretan civilization itself.

The remains of grapes found in Kato Zakros, in the eastern part of the island, are dated to the beginning of the second millennium BC, and the earliest convincing evidence for systematic viniculture for wine making.

Installations for treading grapes were also discovered, demonstrating a technically advanced wine-making process for the time.

Recent research on the island has revealed around 15 workshops for the production of wine amphorae for the export of wine outside Crete. Thus, the period between the 1st and 3rd century A.D is considered the golden age of Cretan wine.

Good Cretan wines, however, became famous across Europe from the 15th century onwards with the production and export of the celebrated Malmsey (Malvazia) wine.

Since ancient times honey has been considered a natural food with the highest nutritional value for man. From Homer to Hippocrates and from Pythagoras to Aristotle, honey was extolled for its high qualities and significance in promoting good healthing in people.

Science has confirmed popular beliefs about honey. In modern times excavations in Egypt brought to light papyrus records dating from 3600 BC where honey is mentioned as therapeutic medium for scores of aliments. For the renowned Mediterranean nutrition, particularly for the Cretan diet, honey is one more precious ingredient that contributes to the longevity of Cretans.

Honey is one of the gifts of nature to man. It comes through a natural process of equally pure materials, nectar, pollen, etc. Today honey is valued as precious food that invigorates the human body. More than 180 substances of high biological significance have been identified in hone, the contrary, a spoonful of honey contains only 23 calories. Greek, in particular Cretan honey is of excellent quality owing to the particular morphology of the Greek/Cretan terrain - wild herbs and plants, scented hills, temperate weather conditions. The rich efflorescence of the variegated flora provides a most favorable background for bee-keeping. The abundance of aromatic herbs and indigenous plants of Crete contribute to production of honey locally that is distinguished for its clarity, color and rich taste. Honey has antiseptic qualities and is highly recommended for all people, irrespective of age.

The blessed land of Crete offers in abundance two excellent tyρes of honey. Both distinguished for their aroma, taste and high nutritional value.

These types are pefkomelo (pine tree) and anthomelo (flower) honey.

A third type, rather a sub-category of the latter type, is the thyme honey which is on high demand owing to its pleasing aroma.

View the embedded image gallery online at:
https://www.creteprivatetours.com/creta-cuisine#sigProId01f6f5fc5a
back to top