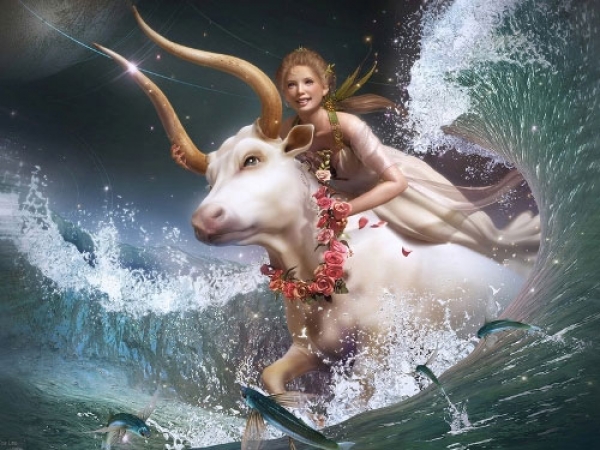 Mythology and legend has bestowed on the Greek island of Crete the privilege of being the birthplace of Zeus, father of the Gods

Mythology and legend has bestowed on the Greek island of Crete the privilege of being the birthplace of Zeus, father of the gods. ccording to mythology, Zeus, the God of gods, was born in Crete. Rhea, his mother, fearing the wrath of Cronos, Zeus' father, who "swallowed" his children in order that they might not usurp his power, came to the island, with the help of Gaia and Uranus, and gave birth to her son in a cave (Dikteon Cave). Cronus was fooled with a rock in dipers and the loud singing and dancing of demons "Kourites", covering the noise of the newborn's cry. Zeus was raised by the Nymphs, drinking milk from goat Amalthia, the later became a star and her skin was Zeus' shield (also the goat's skin became the Aegis, the legendary shield of Athena. He was reared by Nymphs and, when he grew to manhood, he engaged his father in a fight, emerged victorious, and became king of the heavens.

According to mythology, Zeus fell in love with princess Europe of Phoenicia. So, he turned into a white bull with firm body, golden horns and innocent eyes and tricked the princess and her friends who were peaking flowers. He brought Europe to Crete and, as tokens of his love, he gave to the girl: giant Talos to protect the island, a quiver of arrows that always succeeded in hitting their goal and a golden dog as her guardian angel. Mythology claims that Zeus and Europe were united in the area of Gortys, under a platan which became evergreen, or at Diktaion Andron where the nymphs had prepared the bridal bed. Zeus and Europe gave birth three sons: Radamanthys, Sarpedon and king Minos.

When Zeus was united with Europe, to show her his love he gave her three presents, one of which was the bronze giant Talos, created by Hephaestus. According to mythology, Talos was the son of Cris and father of Phaestos or, according to another version, he was Minos' brother. His duty was to travel around the island with his bronze slates with the laws and make sure that they were obeyed. He also protected Crete from the enemy, throwing rocks to the enemy ships or burning them with his hot bronze body. Despite his power, Talos didn't resist Media's promises for immortality, thus being framed and letting the ship of "Argo" pass by Crete without being destroyed. As he stood peacefully, Media stroke his weak vain and killed him, extracting the divine fluid that had inside him, instead of blood. According to another version, Talos died from the arrow of Pias, Philoctete's father.

One of Zeus and Europe's sons was King Minos. Minos replaced Asterios, the former King of Crete and husband of Europe, and became one of the most powerful rulers of the island, ever. "Minos" was probably a royal title symbolizing the power and authority of a great ruler, judge and representative of the gods. The Kingdom of Minos united all the Cretan cities, the biggest being Knossos and Phaestos, and became a great naval power with tremendous cultural and economic development. The Kingdom was divided in three parts, the first including Knossos, the second including Phaestos and the third including Cydonia. The minoan civilization spread and influenced throughout the Eastern Mediterranean Sea, created new cities and progressed in art and literature. Life was based upon strict and fair rules that Zeus indicated to his son, or so is said. Minos legislation was so fair, that he was later appointed superior judge in Ades, judging the sins of the dead. Minos' assistant in administration was his brother Radamanthys, who was equally good at ruling and judging people.

Minos bewed Pasiphae, the daughter of Sun and nymph Crete and together had eight children, Androgeos, Katreas, Glafkos, Dafkalion, Ariadne, Xenodiki, Akalli and Phaedra. According to mythology, when Minos asked Poseidon (Neptune) for a sign that would mean he would become the King of Crete, from the sea emerged a beautiful bull that Minos refused to sacrifice, thus irritating Poseidon (Neptune) who punished Minos by making his wife Pasiphae fall in love with the white bull. Pasiphae, with the help of a wooden cow made by Daedalus, was united with the bull and gave birth to Minotaur, who had the body of a human and the head of a bull. According to myth, this creature lived in the Labyrinth, in the palace's underground and was fed with the blood of youngsters. The famous Athenian hero Theseus defeated Minotaur and released Athens from the harsh "blood tax" that paid to this supernatural creature.

Minotaur lived of human blood and King Minos had ordered the city of Athens, that blamed for his son's Androgeos death, to offer young boys and girls as food for the supernatural creature. Among them was Theseus, the son of King Aegeas, whose mission was to kill Minotaur and released his country from this "blood tax". To his aid came Ariadne, the daughter of King Minos, who was in love with him and offered her help; in return, Theseus would have to marry her and take her home to Athens. Thus, Theseus succeeded in his mission by killing the Minotaur and coming out of the labyrinth wrapping the "Mitos of Ariadne", a ball of thread he had unwrapped when entering the maze. According to myth, Theseus after being united with Ariadne at the islet of Zeus and having two children with her, deserted her. According to mythology, he left her because he was in love with Egli. Another theory is that goddess Athena asked him to do so and yet another one is that god Dionysus fell in love with Ariadne. It is said that Ariadne is the impersonation of the goddess of vegetation, dying and being born again, every year. Theseus' return had an unfortunate ending, as the young hero forgot to take the black sail off the boat as he had promised his father, Aegea. The latter, thinking that the Minotaur had won and killed Theseus, committed suicide by drawing in the Aegean Sea.

In the prime of the Minoan civilization, Crete was visited by Daedalus, one of the period's greatest inventors and constructors. He is said to have built the labyrinth with the numerous corridors and rooms, from where no-one could come out. He is also said to have constructed the wooden cow in which Pasiphae, Minos' wife, was united with the legendary white bull and gave birth to the Minotaur. To avoid King Minos' rage, Daedalus and his son Icarus dared to fly like birds, adjusting to their arms wax wings. Unfortunately, Icarus, impressed by the height and speed, went too high, close to the sun, thus burning his wings and drowned into the Icarian Sea. According to another aspect, Pasiphae gave a boat to Daedalus to help him escape from Crete. The boat was so fast that the sails looked like wings, so it was believed that Daedalus and Icarus had flown, but Icarus fell in the sea and drowned and the island, where he was buried, was name Icaria. According to another myth, Minos irritated by Daedalus' flee, started to look for him asking people wrap a snail in a thread, something he knew only Daedalus could do. Travelling around, he went to Cicely, at the palace of King Kokalus where Daedalus had sought refuge. The King accepted to pass the thread through the snail and gave it to Daedalus who made a small hole in the snail and put in an ant tied to the thread. The ant came out the other side of the snail, thus proving to Minos that Daedalus was there. The Cretan King demanded from Daedalus to surrender, but the daughters of King Kokalus killed him by putting very hot water in his bath, thus ending the adventures of Daedalus.

CRETE OF MYTHS AND THE OLYMPIC GAMES

The spirit of the Olympic games has its roots deep in the ancient Greek times and is associated with the myth of birth of the God Zeus at the scared cave on the Mount Dikti at the plateau of Lassithi, the well-known DIKTAION ANTRON. According to the wonderful myth of Theogonia, at this sacred cave the nymph Aghiali using her fingers shed ash behind her from which the 5 ldei Daktili (daktilo=finger) or Kourites are born, namely Hercules, Epimidis, Paeonios, lassios and ldas. After Zeus' birth, his mother Rhea assigns his protection to the Kourites who dance around its cradle the ancient war dance called Pirihio, covering the baby with their shields and banging their swords on them. The sound from the shields and the fierce steps of the war dance hide the baby's crying thus saving him from the anger of his father Kronos. Later, the five Kourites move Zeus away from Diktaion Antron, to Olimbia where they organize tournaments in his honour and crown the winners with olive-tree leaves. The first athletic games in which only Gods participated are organized by the senior of the Kourites, by Hercules who later on decided to organize races every five years to which other young men could participate. These races were named Olympic in honour of the Olympian Zeus. It is worth visiting the birthplace of Zeus and Ideon Daktilon, to the cave of Diktaion Antron, situated at the blessed by God and nature plateau of Lassithi and by unrolling the tangle of the myth of Theogonia, to reveal the modern OLYMPIC IDEAL.

Published in Mythology of Crete

View the embedded image gallery online at:
https://www.creteprivatetours.com/mythology-of-crete#sigProId83d9611a6b
back to top