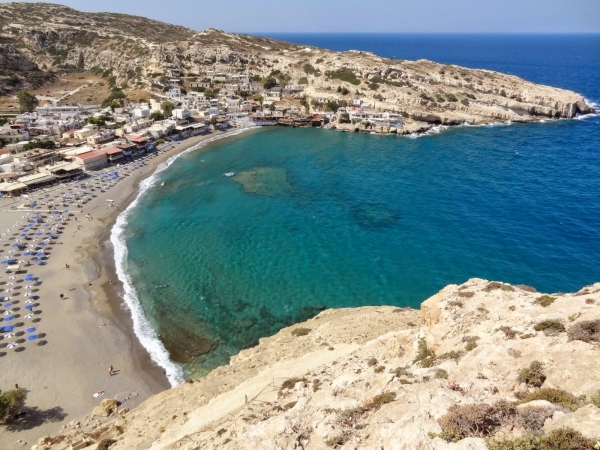 Gortys or Gortyna, as it is called today was one of the strongest and most ancient towns of Crete. During the Roman and early Byzantine times, it was the capital of the island. It was in constant conflict with Knossos, but cultivated peaceful relations with the Achaeans and the Ptolemies of Egypt. During the period of Roman domination it knew its greatest period of prosperity, since it took the side of the Romans and did not put up a resistance against them.
Gortyna accepted Christianity early and became the see of the first Bishop of Crete, the Apostle Titus. In the early Byzantine period it flourished and retained its prestige until 828 AD, when it was taken and destroyed by the Saracens. From that time on, the town was deserted and was never again inhabited.

Phaestos is second in importance only to Knossos, from the archaeological point of view. It is built on a hill (at an altitude of 100 m., approximately, above sea level), and commands the fertile plain of Kato Messara, which is surrounded by impressive mountains (Psiloritis, Asteroussia, the Lasithi mountains far away in the background). To the south lies the Libyan sea. Pheastos, owing to its importance, is mentioned in the texts of ancients writers (Diodorus, Strabo, Pausanias), but also by Homer. According to mythology, the dynasty which ruled Phaestos was that of Rhadamanthys, son of Zeus and brother of Minos. It was a very strong, rich, populous and independent city. The state of Phaestos also disposed of two strong ports, Matala and Kommos to the southwest. The area had been inhabited since Neolithic times (3000 BC approximately). The first palace was built in approximately 1900 BC and together with the other structures around, covered an area of 18.000 sq.m. (slightly less than that of the palace of Knossos). The great earthquake which occurred around 1700 BC was the cause of its destruction, as it was of that of Knossos. In its place a new, more impressive palace was built, to which belong the greatest part of the ruins which have been restored, while several parts of the first palace have also been excavated, mainly those lying to the southwest.

Matala, only a small fishing village a few years ago, has now developed into a modern holiday center. The hollowed-out rocks with the artificial caves are the characteristic feature of the village. Some of these may possibly have been used as prehistoric dwellings while, during the 1st and 2nd centuries, they were used as tombs. Today the area is an archaeological site and has been fenced off. The beach of Matala opens like an embracing arm into the Libyan sea.

View the embedded image gallery online at:
https://www.creteprivatetours.com/tours/item/3-gortys-phaistos-matala#sigProIdb7fe33982c
back to top