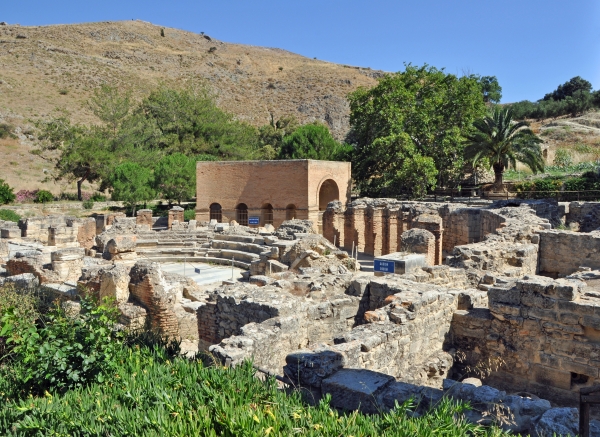 Gortyn, in the plain of Messara, was a major Cretan city, and one of the most powerful in historical times. Its architectural remains date mainly from the Roman and Byzantine periods and cover an area of about 2,000 square meters.

The excavations in the area were begun in 1884 by the archaeologist F. Halbherr and continue up to the present day. The habitation in the area of Gortyn from as early as the Neolithic period is attested by vases and stone tools found on the hills, to the north, and in the plain. The Minoan period is represented by the rich finds from the Neopalatial villa at Kannia.

In the Geometric period (11th-8th c. BC), a settlement evolved on the acropolis on the hill of Ai-Yannis, extending in the Archaic period (7th-6th c. BC) to the hill that was the site of the later Odeon, on which the earliest agora of the city was organized. A second agora later grew up in the area of the temple of Pythian Apollo. A fortification was built on the 7th century BC acropolis and a sanctuary was founded, from which the ruins of a temple survive, with some notable sculptures. A storage pit has also been uncovered containing clay finds dedicated to Athena Poliouchos. Of the Classical city (5th-4th c. BC), the remains are preserved of a building on the site of the Odeon, and inscriptions testifying to the influence exercised by Gortyn on other Cretan cities. It was here, in 470 BC, that the first silver Cretan coins were minted.

In the Hellenistic period (3rd-1st c. BC), the city brought the entire plain of Messara under its control and entered into friendly relations with the Macedonians and the Ptolemies. At the instigation of the latter, defense works were built on the hills to the north of Gortyn. Most of the building remains from this period are located in the village of Metropolis, buried beneath the ancient deposits of Roman and Byzantine times. In the Roman period (1st c. BC-4th c. AD), some imposing public buildings were erected in the area of the Praetorium, where a third agora developed, and at the same time the city was equipped with an extensive water-supply and drainage network.

St. Titus the apostle founded the first Christian church in Crete at Gortyn, and in AD 250 the Ten Saints (Ayioi Deka) were martyred here. Gortyn continued to flourish in the Early Christian and Early Byzantine periods (4th-9th c. AD), when there was extensive building activity, and the largest fortification wall on the acropolis was built in the reign of the emperor Heraclius (7th c. AD). Gortyn was destroyed by the Saracens in the early 9th c. AD, and has remained uninhabited ever since.

View the embedded image gallery online at:
https://www.creteprivatetours.com/points-of-interests/item/24-gortyn#sigProId24811ac02a
back to top