The Palace of Phaistos 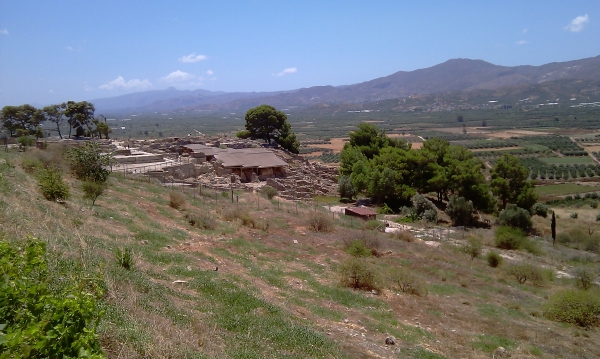 The Palace of Phaistos

The palace of Phaistos (Faestos, Phaestos, Faistos) commands the Messara plain from its location on a low hill, and it is the second largest palace of Crete after The Palace of Knossos.

The site was inhabited since the late neolithic era with several well organized settlements on the hill and the surrounding area, and the first palace was built around 2000 BC. Excavations have unearthed a rich historical strata, and some ruins date back to neolithic times. The palace, just like the other palaces of Minoan Crete, was destroyed three times before it was rebuilt on the ruins of the old buildings in 1700 BC. Aesthetically, Phaistos is built on the most spectacular setting of all palaces in Crete, high on a dramatic hill, overlooking the entire Messara plain framed by the Asterousia mountain range which is sprinkled with small villages to the south, and the Lasithi mountains to the East. Looking to the West one encounters the Messara gulf just beyond the low hill of Agia Triada, and the dramatic 2456m tall solid body of Mt. Idi, otherwise known as Psiloritis towers above when one gazes north.

The architecture of Phaistos is more simplified compared with The Palace of Knossos, and it is built in an orderly arrangement that refers to a single architect. The building outlines and the ground plan is easily deciphered by the visitor at first glance, however further examination reveals the complexity built into the site over hundreds of years of destruction and rebuilding cycles. The complex of architectural elements is a delightful amalgam of the old and new palace structures. During the rebuilding of the palace in 1700 BC several of the rooms from the old palace were retained in the new building, and archaeologists today have excavated several areas of the new palace to reveal the older structures below. The pavement of the west courtyard along with the few bottom steps of the converging staircases have been exposed during modern excavations, for they were buried one meter deep when the new palace was built. The exposed levels of the old palace which have been retained by the Minoans or exposed by archaeologists paint a picture of architectural intricacy which rivals this of the new palaces. The old levels are best preserved at Phaistos, more than in other palaces around Crete, and have prompted scholars to conclude that the complexity of the structures was not dramatically increased during the rebuilding of the Neopalatial period. The raised processional walkway which traverses the western courtyard diagonally in the old palace connected this area to the main courtyard after an abrupt turn at the south end of the palace. Today this part of the walkway is covered under the buildings of the Neopalatial era.

The main courtyard is vast and it retains its original pavement of stones, and it offers unobstructed views of the Messara plain. The irrigation works under the central courtyard and the entire palace indicate an emphasis on sanitation which was a priority for all Minoan palaces. The palace of Phaistos used the small river Ieropotamos at the foot of the hill for its water supply, along with some deep wells on the palace itself. The builders of Phaistos took great care to create a functional as well as an aesthetically pleasing environment, which accommodated the spectacular views from the hill. The buildings are arranged around expansive courtyards following the uneven surface of the hill, and with their walls enclose the panorama of the Messara plain and Mount Idi to the south and North respectively. The spectators sitting at the theater would have had a great view of the south and the east. According to Vincent Scully, the buildings of the palace were constructed in such a way that the open areas were always enclosed on one side by a palace wall, and on the other side by a major mountain mass.

Phaistos was the home of Radamanthis, the brother of the legendary king of Minos. The palace continued to be used even after its destruction of 1400 BC, although it gradually lost its power until the emerging center of nearby Gortyn destroyed it finally in 200 BC.

View the embedded image gallery online at:
https://www.creteprivatetours.com/points-of-interests/item/26-the-palace-of-phaistos#sigProId8d8c744f07
back to top