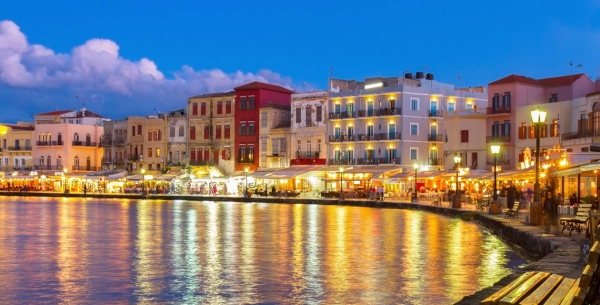 Going west, we leave behind the range of Mount Ida (Psiloritis  mountain)   and  the   village  of   Fodele.  A
picturesque little village surrounded by rich orange groves. This is the native village of the great painter Dominicos Theotokopoulos, or “El Greco” (1541-1614). The house where he was born is still standing. A short visit is always recommended.

We continue westwards and 48 kms. from Heraklion to the right leads to the lovely coastal settlement of Bali, built on a picturesque little bay.
Not far from the settlement is the monastery of St. John the Baptist, dating from the 16th century.

Eventually our tour will take us to the historic Monastery of Arkadi, the Cretan symbol of freedom, built on a hill with a magnificent view over the verdant area surrounding it. The monastery is built like a fortress.
It is surrounded by several buildings and its external walls are 1.2 m. thick. Almost at the center of the precinct stands the monastery church. The church with its two naves was built in 1587 and its architectural style is a mixture of Renaissance, Gothic, Classical and Baroque elements. After the Greek War of Independence of 1821, many Cretan guerilla fighters who were being hunted by the Turks, took refuge in the monastery. On November 7th, 1866, a Turkish force of 15.000 men besieged the monastery, and its leader demanded of Abbot Gabriel to surrender the members of the revolutionary committee who were gathered there. At that time apart from the members of the committee, 300 armed men and 600 or so women and children had also taken refuge in the monastery. When the Abbot refused, the Turks opened fire. Those entrenched in the monastery resisted fiercely for two days, but on November 9th, their resistance weakened and in order not to surrender to the enemy, the fighters set fire to the powder magazines. In the explosion, all those in the monastery were killed and, with them, many Turks who had in the meantime forced their way into the monastery. The “Arkadi holocaust”, as this heroic sacrifice came to be called, is a landmark of immense importance in the history of the struggle of the Cretan people for freedom. There is also an ossuary, where the bones of the dead heroes of the Arkadi holocaust are kept.

Continuing west and leaving the massive mountain range of the White Mountains we arrive at the beautiful town of Chania.

This is the largest and most important town of western Crete, which retained its local color. It is one of the loveliest towns in Greece and the many vestiges of its past give it a particular charm Her Venetian harbor, narrow streets and old buildings from the Venetian and Turkish periods are almost intact and bring directly into the past. One of the most characteristic spots in the town is the impressive Municipal Market, in the center of the town, which was built in 1911.

The   Archaeological   Museum   of   Chania
contains important finds from the excavations in the Chania region and the whole of western Crete, dating from the Neolithic to the Roman period.
In the Chania Naval Museum are exhibited models of ships from antiquity to modern times and relics from the historic battles of the Greek Navy.

On this tour a short stop at the old town of Rethymnon is always recommended. The Venetian fortress, Loggia and the fountain, the last of the mosques to be found in Crete and the wide variety of architectural styles make Rethymnon unique and place worth to visit.

View the embedded image gallery online at:
https://www.creteprivatetours.com/tours/item/7-west-crete#sigProId3aecd2af20
back to top