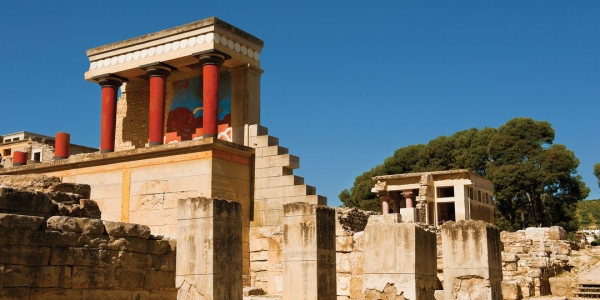 The archaeological site of Knossos is at a distance of 5 Kms. southeast of Heraklion city.

The name Knossos is mentioned by Homer, who speaks of Knossos as a big city. The Knossos palace is famous all over the world through the myths of Europa, the Minotaur, the Labyrinth and Theseus, Daedalus and Ikarus. It is the most ancient civilization of Europe and its reality you can’t miss.
The first palace of Knossos was built around 1900 BC, on the remains of a pre-existing Neolithic settlement, which had been inhabited since 6000 BC. This palace was destroyed around 1700 BC and, in its place, another one was built. During the period between 1700-1450 BC, Minoan Crete, and especially Knossos, was at the height of its brilliance and power. In 1600, a destructive earthquake caused serious damage. Soon however, the necessary repairs were made and, at the same time, other sumptuous buildings were erected on the same site. Around 1450, a new catastrophe occurred – probably due to the eruption of the volcano on Thera (Santorini) – with destructive effects.
Then came the invasion of the Achaeans and, a little later, during a battle, the palace area was no longer used, but Knossos continued to be an important city-state until the first Byzantine period.
During the Venetian period, Knossos sank into oblivion, its glorious name was forgotten. Almost all the ruins of the palace, which have survived today, belong to the Neo-palatial period.

The Archaeological Museum is one of the most important and richest of Greek museums and it commands a significant place among the list of the greatest museums in the world. Its 20 rooms house a wealth of exhibits originating exclusively from Crete and related to the island’s past (from Neolithic to Roman times). Unique are the finds from excavation at Knossos, Phaestos,  Agia  Triada, Malia  and  other  Minoan   centers  of  central  Crete.
It is located in the center of Heraklion town.

Heraklion City is built on the site of the small harbour, which was the seaport of Knossos. This small harbour much later became an important fortified town under the Arabs, who held it for a period of over one hundred years (824-961 AD). During the period of Venetian rule (1204-1699) it was called Candia, a name which eventually came to cover the entire island. This was a period of prosperity for the town, which was fortified by its occupiers with another strong wall, was adorned with a great number of splendid buildings, fountains, squares, and churches, and a time during which the arts and literature also flourished. Then also 21 years of close siege, the town finally surrended to its new conquerors who, this time, came from the East: the Turks (1669). In 1913, Heraklion was incorporated into the free Greek State, together with the rest of Crete. During the German occupation its inhabitants organized a brave resistance movement together with the other Cretan patriots.
Heraklion is now a modern town (the largest of the island) and is the administrative, commercial, industrial and agricultural center of Crete.
The Old Port is on the left of the modern port and during the Venetian period it was an important commercial and military center.
The Venetian Walls are the most important fortifications of the Venetian period.
The Castle or Koules was built at the entrance of the Venetian port in order to protect it from raids. It is open to the public and on the top an outdoor theatre has been built. The name Koules is a Turkish name. The Venetians called it Rocca al Mare.
The church of St. Titus was initially built by the Byzantines. The Venetians used it as a Catholic Cathedral and the Turks as a mosque. In 1872, it was rebuilt on its old foundations, so that it could again used as a Greek Orthodox church.
The church of St. Mark was built by the Venetians and it is used today as a Literary Institute, as a permanent exhibition hall for copies of Byzantine frescoes and as a concert hall.
The Loggia is the most elegant of the Venetian buildings of the town. Today it houses the Town Hall.
The Cathedral of St. Minas is an impressive and one of the largest churches in Greece.
The Morosini Fountain constituted the center of Venetian Candia. The fountain has a central basin, resting on the backs of four lions.

The Bembo Fountain in Kornaros square is the oldest fountain to have survived.
The Municipal Market is a picturesque part of the modern Cretan town. An outdoor market, offering in plenty all kinds of goods, market produce, fruit, nuts, herbs, spices, meats, cheeses and souvenirs.

Other Museums in Heraklion city

The Historical Museum of Crete is also located  in the  town of  Heraklion  with
exhibits dating from the Byzantine period to the present. It also includes important historical documents and items of popular art. In addition, paleo-Christian, Byzantine and Venetian finds as well as Turkish documents provide invaluable information about the history of the island. Recently the museum acquired a miniature model of the town of Heraklion as it existed during the Venetian rule. This model is exhibited in a specially arranged hall.
The museum also houses “Mount Sinai” by El Greco.

The Natural History Museum of Crete offers
the visitor a unique chance of a rich experience of the natural environment of Crete. In a suitable exhibition area of 800 sq.m., with realistic models of biotopes, animal, and plant collections, as well as plenty of photographic material, the visitors discover the natural beauty of Crete and mainland Greece.

Collection of Byzantine icons – Saint Catherine’s church, also called the Museum of Religious Art. It was built in the 15th century and was turned into a mosque during the Turkish occupation. It includes important frescoes of the 13th and 14th centuries, Christian’s relics, manuscripts, religious books, wood-carvings and many Byzantine icons.

Estimate tour duration: 6 hours (depending the points of interests)

View the embedded image gallery online at:
https://www.creteprivatetours.com/tours/item/4-knossos-palace-archaeological-museum-heraklion-city#sigProId87b26c22f0
back to top