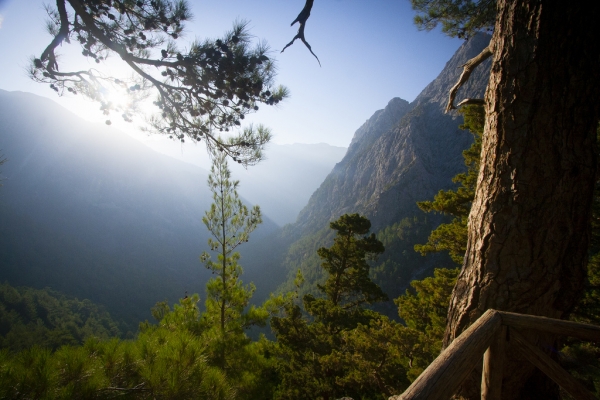 This tour is a great opportunity to discover the true essence of Crete’s rugged landscape by uncovering on foot, Crete’s national park.

The Gorrge of Samaria is situated in the National park of Samaria, in the White Mountains in West Crete.

As we reach Chania, then we drive southwards. On our journey southwards we pass through the verdant valley of Keritis, with its rich groves of citrus trees. Continuing our drive, we pass through several villages. At the 12th km. point, a fork to the right takes us, after approximately 500m. to Alikianos. Alikianos was the fief of the Venetian family of Da Molin. Here was situated their imposing castle, of which only scant remains can still been seen. At the 154th kilometer of the main route, we meet the village of Fournes. After climbing a road with many curves for 9,5 kms., on the northwestern flank of the White Mountains, we come to Lakkoi, a lovely village amid olive trees and vineyards, built on the nountain-side, with a wonderful view of the snow-capped peaks. The road continues westwards, towards Kares, and then turns south again. We continue to climb. We pass through the historic “Strata” of the Moussouros family, which was celebrated in the old “rizitika” songs, and arrive at the highest point of our route (1200 m.) from where there is a panoramic view of the Omalos plateau, with its surrounding ring of imposing mountain peaks. The plateau is in the shape of an irregular circle, approximately 4 kilometers in diameter. Almost in the center of it lies the small settlement of Omalos (39 kms. From Chania). As a result of its inaccessibility and its naturally fortified position, the area served as a base of operations and refuge for revolutionary fighters many times during the island’s history. Our road passes through the plateau and, after 4 kilometers, ends up at the Xyloskalo (wooden stairway) ridge (altitude: 1227 m.), 43 km. south of Chania, where the entrance to the gorge is situated.

On this spot there was once a wooden stairway to facilitate the descent, which is how the place got its name. A guest house is operating here, and the view from it over the surrounding area is superb. Those visitors who decided to walk through the gorge, begin their descent from Xyloskalo, down some steps to begin with and then along a footpath. The sites called “Portes” (doors) are extremely impressive, as here the walls of the ravine almost touch each other (3-4 m.). The narrowest “porta” is the one near the exit to Agia Roumeli. A little stream, which becomes a raging river in the winter, flows down the middle of the gorge. The gorge has been declared a National Park in order to protect its rare flora and fauna, and in particular the Cretan mountain goat, called “kri-kri” or the “wild one” by the locals.

In 1980, Samaria was awarded a prize by the council of Europe, as one of the most beautiful virgin sites in Europe. The descend into the gorge is quite difficult and crossing it takes about 6-8 hours. Hikers must wear sturdy walking shoes and hats, and carry along with them only the essentials. There are springs along the way. Crossing the gorge, also called the “Farangas” by the locals, is a unique and unforgettable experience. Hikers are face to face with nature and its wild beauty. Their difficult hike along the rugged, downward path is rewarded by the impressive, pristine scenery, untouched by human hands and immensely beautiful, which leaves them with a feeling of awe and infinite admiration for the pure and unalloyed grandeur around them.

As the come out of the gorge, the hikers reach the village of Agia Roumeli. This is a seaside settlement with a wonderful beach and a lovely limpid sea, about 1,5 kms. From the exit of the gorge. It is built on the site of the ancient city of Tarra. The village is cut off on the landward side. It is connected only by sea – small boats make regular journeys – with Chora Sfakion to the east, with Soughia and Palaeochora to the west. A swim in the excellent waters of the beach of the Libyan Sea is the ideal epilogue to a long walk.

A meal in one of the local restaurants awaits you as a boat to carry you to Chora Sfakion, where your chauffer will be waiting for you.

Estimate tour duration: takes the whole day starting with your pick-up from your hotel very early in the morning (depending your accommodation area the pick-up various between 04:00 to 06:00).

View the embedded image gallery online at:
https://www.creteprivatetours.com/tours/item/35-samaria-gorge#sigProIda7c45996ca
back to top