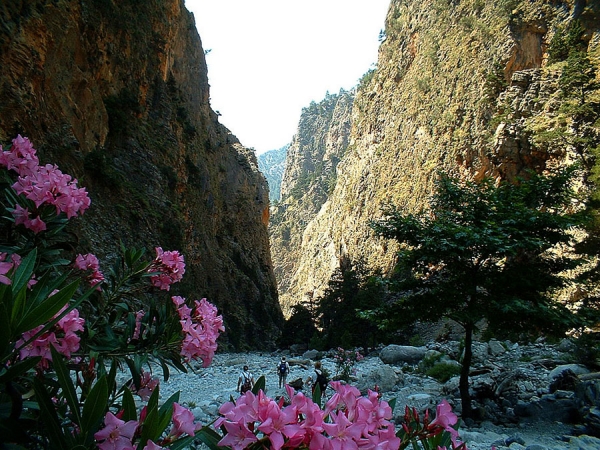 The Samaria Gorge is a National Park of Greece on the island of Crete - a major tourist attraction of the island - and a World's Biosphere Reserve.

The walk through Samaria National Park is 13 km long, but one has to walk another three kilometers to Agia Roumeli from the park exit, making the hike 16 km long. The most famous part of the gorge is the stretch known as the Gates (or, albeit incorrectly, as "Iron Gates"), where the sides of the gorge close in to a width of only four meters and soar up to a height of almost 300 meters (1,000 feet).

The gorge became a national park in 1962, particularly as a refuge for the rare kri-kri (Cretan goat), which is largely restricted to the park and an island just off the shore of Agia Marina.

There are several other endemic species in the gorge and surrounding area, as well as many other species of flowers and birds.

The village of Samaria lies just inside the gorge. It was finally abandoned by the last remaining inhabitants in 1962 to make way for the park. The village and the gorge take their names from the village's ancient church, Ossia Maria.

A must for visitors to Crete is to complete the walk down the gorge from the Omalos plateau to Agia Roumeli on the Libyan Sea, at which point tourists sail to the nearby village of Hora Sfakion where their chauffer will be waiting for them.

The walk takes six to eight hours and can be strenuous, especially at the peak of summer.

View the embedded image gallery online at:
https://www.creteprivatetours.com/points-of-interests/item/34-samaria-gorge#sigProId65d1f4fa49
back to top