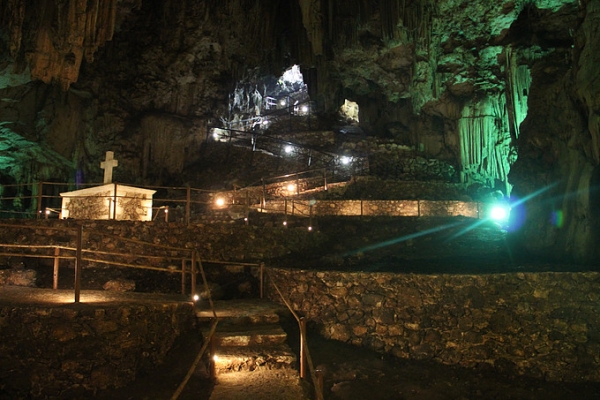 The Melidoni Cave is located about 1800 metres northwest of a village with the same name. It has an extremely interesting history and amazing archaeological findings some of which are exhibited in the Archaeological Museum of Rethymno.

The Melidoni Cave is also called "Gerondospilios". It was used for religious ceremonies. During the Minoan Civilization, it was a place of worship for Talos the bronze giant guardian of Crete who protected the island of Crete from enemies.

It is of archaeological and historical interest. In October 1823, 370 women and children and 30 warriors who hid from Hussein Bey sought refuge in the Melidoni cave. When he found out, the cave was surrounded by his army and he asked Cretan people to surrender. When they refused to do so, Ottomans started to attack them. Three months later they dropped combustible materials into an opening leading to the cave and set it on fire. Men, women and children lost their lives in the cave in January 1824. In the central room of the cave there is an ossuary containing the bones of the heroes of Melidoni cave.

The arched entrance to the cave is leading to the first chamber of the cave called "Room of Heroes", where we see "Mnemion" (Monument), a complex filled with stalagmites. On the way to "Stavrodromi" (Crossroad) we get into the right chamber. We reach the "Pashley Room" where stalagmites and stalactites create a wonderful complex. As we keep on walking, the rock formations give the impression of being on another planet. In the "Room of the rocks" through a narrow path we reach the "Chamber of Katavothra" and we turn right to the "Iperoon" (Gallery). Walking down the cave we reach "Stavrodromi" again and we walk on the left side of the cave which has only one chamber "The Chamber of Curtains", which is adorned with impressive stalactites and stalagmites.

Earlier archaeological findings. In 1940 a double axe was handed over the Heraklion Museum, probably found during illegal excavations, while Neolithic tools were found in 1928. In 1954 P. Faure was able to gather in a more systematic way detailed archaeological information, when he conducted a limited research in the cave, during which he discovered Late Minoan, Geometric as well as Roman pottery.

During the Roman period the cave was used as a sanctuary of “Taleos Hermes” and sacrifices were performed here to honor him. The cave was actually a significant sacred site in the region, as it was situated on the “crossroad” of three great ancient cities: Axos, Eleftherna and Grivilon.

View the embedded image gallery online at:
https://www.creteprivatetours.com/points-of-interests/item/31-melidoni-cave#sigProIda796448239
back to top