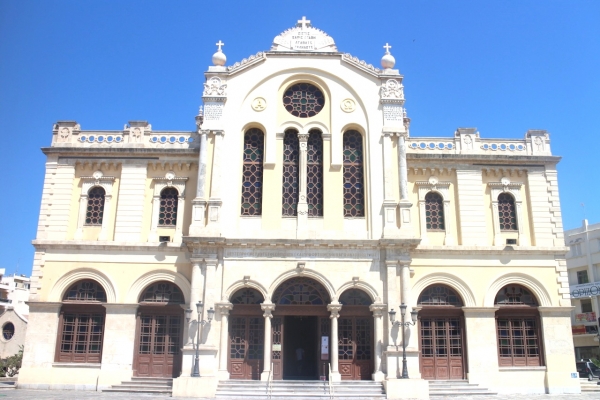 The imposing church of Saint Minas was built in 1862 and symbolizes the gratitude of the people of Heraklion to the Saint for the protection offered to them during the period of the Turkish rule.

St. Minas is the patron Saint of Heraklion. The day of his celebration (November 11) is a holiday for the city. Many legends surround his name, narrating stories how he protected the city in many occasions, like when the Turks attacked and even during the German bombardments in 1941. The bomb exhibited right next to the Cathedral of St. Minas, by the staircase that leads to the plateau of St. Catherine, stands witness of the Saint’s protection as it fell at this point in 1941 but never exploded.

The famous Cretan writer Kazantzakis often refers to him in his book “Captain Michalis” (UK title “Freedom and Death”): “On midnight, when the town is in deep sleep, St. Minas descends from his icon and sets off for the quays, crossing through the neighborhoods of the Greeks; when a door he finds open, he locks it; when a christian he finds ill and sees light on his window, he stands, pleading to God to heal him”.

The Cathedral is one of the largest in Greece and was built in the mid-19th century. The construction was interrupted by the 1866 Cretan revolution and continued in 1883. The Cathedral was finally completed in 1895. To its left stands the small temple of St. Minas.

The small temple of St. Minas

The small temple of St. Minas might be smaller than the big one next to it, but it is older. It stands there since the Venetian times and after its renovation in 1735 it became the religious center of the Christians in the Turkish-occupied Chandax (Heraklion). A tragic events marked its history: in June 1821 the Turkish soldiers slaughtered everybody in the church during mass, including the priests and the bishops and the archbishop. In 1826 at Easter a second massacre was prevented when an unknown cavalryman chased the Turkish army away with his sword. According to legend, this unknown cavalryman was St.Minas, the protector of the city.

It is worth visiting the small temple of St. Minas to see the valuable icons of noteworthy Cretan icon painters of the 18th century, such as the icon of Christ's Birth (of Georgios Kydoniaios) and the icon of Panayia Galaktotrofousa (of Georgios Kastrofylakas).

View the embedded image gallery online at:
https://www.creteprivatetours.com/points-of-interests/item/27-cathedral-of-saint-minas#sigProId0876fd1c45
back to top