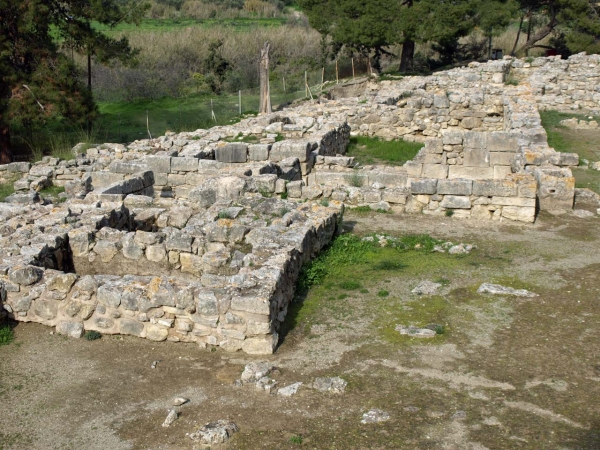 The Minoan royal villa at Ayia Triada, 3 km to the west of the palace of Phaistos, takes its name from the small medieval village in this area.

It is a superbly well-constructed building of considerable importance, and has yielded a wealth of outstanding finds. The history of Ayia Triada closely follows that of Phaistos, with which it was directly connected. The earliest traces of occupation in the surrounding area go back to the Neolithic period.

The archaeological evidence indicates that the site of Ayia Triada was continuously inhabited from the Pre-Palace period down to the 13th c. BC. Later, sanctuaries were built here in Protogeometric and Geometric periods, and the sanctuary of Zeus Velchanos functioned in the Hellenistic period; there are also sporadic finds from Roman and Venetian-Turkish times.

The archaeological site has three main centres: 1) the Minoan royal villa, dating from the New Palace period, and the Post-Palace buildings erected on its ruins, 2) the Minoan settlement and “agora”, and 3) the cemetery. The view has been advanced that the complex was a summer resort for the kings of Phaistos, and also that the rulers of Phaistos moved here after the decline of the palace.

The royal villa, or small palace, at Ayia Triada was erected in the New Palace period, about 1600 BC, and was destroyed at the end of the 15th c. BC, along with the palaces and the rest of the Minoan centers. It was decorated with palatial luxury, with gypsum facing slabs, painted floors, and wonderful wall-paintings. The villa has the shape of an irregular L. The ruler’s quarters are in the north-west corner of the complex, and comprise a main hall, with a portico and a light-well, a room with a “bench” and a revetment of gypsum slabs, and a peristyle courtyard with a fine view. The south-west part of the building has a series of rooms and is thought to have been the personnel quarters and there were other residential rooms, and storerooms in the north wing. Immediately to the south of the meticulous facade of the north wing is the Square of the Sanctuaries. The south-east side also has storerooms, cult rooms and residences. In the 14th c. BC the site was once more a powerful administrative center, as is clear from the fact that a new building programme was implemented, including the erection of two imposing structures – the larger of the two is in the type of the “Mycenaean” megaron – on top of the ruins of the north wing and the Square of the Sanctuaries. The Minoan settlement, the “village” of New Palace (17th-15th c. BC) and Post-Palace (14th-13th c. BC) periods, lies to the north of the villa. The “agora” was erected in the square on the east side of it, also in the 14th c. BC; this was a large complex of eight storerooms or shops, fronted by a long, rectangular portico with columns and pilasters. The cemetery, just to the north of the settlement, also contains two early tholos tombs. Some excellent finds have been yielded by the site at Ayia Triada: a wall-painting with cats, birds and lilies, a painted floor with dolphins and octopuses, three famous stone vases with relief scenes (Harvester Vase, Chieftain Cup, Boxer Rhyton), a large number of clay and bronze figurines, bronze ingots, inscribed tablets, jewellery, and lavish pottery. Special mention should be made of the unique stone sarcophagus, painted with composite scenes showing the cult of the dead.

All the finds are on display in the Herakleion Archaeological Museum.

View the embedded image gallery online at:
https://www.creteprivatetours.com/points-of-interests/item/28-ayia-triada#sigProId6edb7d4b06
back to top