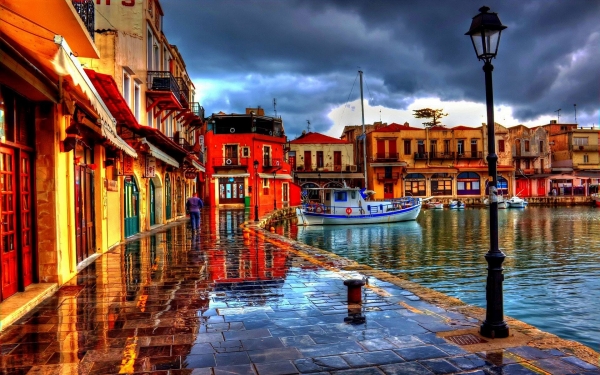 Rethymno is the capital town of the wider prefecture of Rethymno. It is located on the northern coast of Crete, at a distance of 80 kilometers from Heraklion. It is a town that uniquely combines the traditional and classy with modernity.

The old town of Rethymno is picturesque, with the beautiful Venetian harbor, the castle of Fortezza and its narrow-cobbled alleys. The old city of Rethymno still preserves its old urban structure to a great extent, formed during the Venetian period and later reformed during the Turkish occupation.

It has been declared a protected historical monument and a traditional settlement. Also, there is the Archaeological Museum, the Museum of Folklore and the Religious Museum.

The city of Rethymno is an ideal tourist destination for visitors who wish to explore the rich cultural heritage and the natural beauties of Crete. This well-organized city offers to visitors a variety of picturesque routes to follow and numerous historical monuments to visit.

The layout of Rethymnon is directly linked to the sea, with the main Venetian street, the Ruga Maistra (today's coastal Venizelou Avenue) running parallel to the sea.

The Venetian harbor. Rethymno's harbor area is a fine place for a coffee at one of the cafes and perhaps you will chance to eat there, just for the atmosphere.

The Fortress dominates the city and makes Rethymnon very photogenic, its pedestrian streets below, strewn with charming old buildings. Venetian influences abound and the minarets and domed mosques remind of the Turkish influence long gone.

Numerous shops for souvenirs (with many local products now available), trendy fashion or imaginative jewellery...the old and the modern combine to make a colorful and buzzing town.

The modern city of Rethymno provides the visitors with all kinds of amenities. It is also famous for its nightlife and hospitality.

View the embedded image gallery online at:
https://www.creteprivatetours.com/points-of-interests/item/51-rethymno-city#sigProId19e5b9d81c
back to top