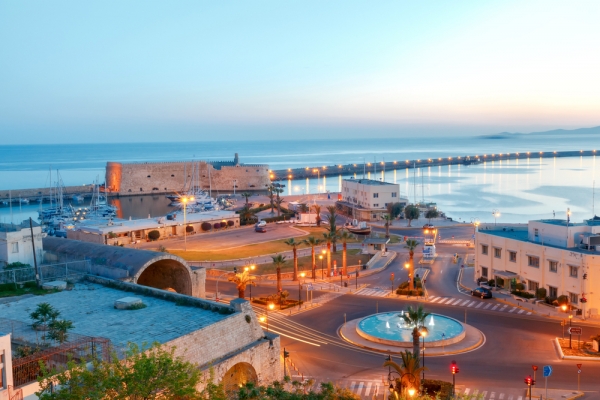 Heraklion is the largest city of Crete and one of Greece’s major urban centers. Its development begun in the wake of the 9th century AD (in antiquity, Knossos was the island’s most important center, followed by Gortyn). In later times, Heraklion came under Arabic, Venetian and Ottoman rule; its conquerors initially gave it the name Khandaq or Handak which was corrupted to Candia.

Among the most outstanding sights of Heraklion are the fortification walls that delimit the “old city”. The first fortifications were built by the Arabs and were later reinforced by the Venetians (15th century). From the seven bastions, only the Martinengo bastion survives to this day; there, visitors will find the tomb of the renowned writer N. Kazantzakis, overlooking the city. From the four gates to the city, the most important is Chanioporta (1570) with the characteristic winged Lion of Saint Marc and the New Gate (1587) at the southern side.

In the old (Venetian) port, next to the modern facilities, one can see the vaulted tarsanades where ships used to be built, while the western side is dominated by the Koule fortress (16th century).

In the heart of the city there are many monuments dating to the Middle Ages, a period in which Heraklion witnessed great prosperity. From the port, ascending 25 Avgoustou (August) street, one reaches a square where the church of Agios Titos is found (built in 1872 at the site where a Byzantine church once stood), while next to it lies the Venetian Loggia (16th century), a magnificent, ornate arcaded Venetian building decorated with blazons, trophies, etc., which served as a meeting place for the Duke and other noblemen during the Venetian period.

A typical feature of Heraklion is its Venetian and Turkish fountains, scattered all around the city. The most famous one is the Venetian-style Μorozini fountain, also known as the Lions (1628), a landmark for local inhabitants and visitors alike. Other noteworthy Venetian fountains are the Bembo fountain (1552-1554) on Kornaros Square, the Sagredo fountain (1602-1604) built in the northwestern corner of the Loggia, and Priuli fountain (1666) located near the port.

Among the churches of Heraklion, the one that stands out is the imposing and sizeable Metropolis of Agios Minas (on Agia Ekaterini Square), built between 1862-1895. Adjacent to it, stands the chapel of Mikros Agios Minas and on the northeast, is situated the church of Agia Ekaterini (16th century), which functionsas a museum housing exhibits from the Cretan Renaissance. The church of Agios Markos (13th century) towers over Venizelou Square, while other important churches in the city are the Monastery of Agios Petros and Pavlos, the Panagia Akrotiriani, the Panagia ton Stavroforon, etc.

One should not miss out on a visit to the Archaeological Museum, one of the most important museums in Greece; it contains almost all the unique treasures of the Minoan civilization unearthed at Knossos, Phaistos, Malia and other sites. Other museums that are worth visiting are the Historical Museum & the Museum of Natural History.

In the market of Heraklion, one of the richest in the Mediterranean, visitors can find all sorts of modern products, as well as traditional Cretan products such the famous Cretan olive oil, raki, local wine, honey, herbs, etc.

View the embedded image gallery online at:
https://www.creteprivatetours.com/points-of-interests/item/43-heraklion-city#sigProId2e3fcd3432
back to top