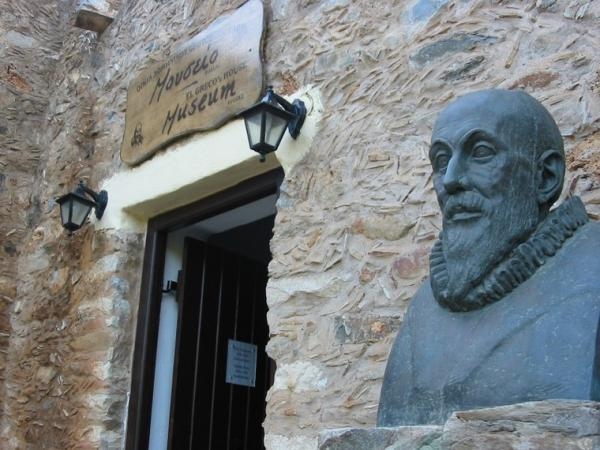 The museum of Domenicos Theotokopoulos is located at the site of "archontika" in the beautiful setting of Skoteini, near the Byzantine church of Panagia.

The museum is housed in a renovated post-Byzantine building complex and is open to the public since 1998. About ten thousand people visit the museum every year.

The exhibition includes a small collection of reproductions of the works of the great painter, commonly known as 'El Greco'. An information pamphlet about the life and work of Theotokopoulos is available in 5 languages and is distributed to visitors. Next to the museum there is a rest area and a cafeteria under the shadow of the centuries-old trees while a bit further there is a stone-built water well, part of the post-Byzantine farm.

El Greco (1541 – 1614), as Domenicos Theotokopoulos was commonly known, is considered to be one of the greatest painters of the Spanish renaissance. He was born in the village of Fodele in Crete and started studying post-byzantine art at an early age. When he was 26 he travelled to Italy (Venice and Rome) where he enriched his style with elements of Mannerism and Venetian renaissance.

In 1577, he moved to Toledo, Spain where he lived for the rest of his life and produced his best known paintings. El Greco was distinguished for developing his own dramatic expressionistic style evident in his paintings that still move and inspire many people and artists around the world.

In 1934, professors and students from the University of Valladolid donated to the community of Fodele a memorial stone made from the rocks of Toledo, the second homeland of the painter. The stone bears the anaglyph of El Greco's figure and the inscription on it writes: "LA FACULTAD DE HISTORIA DE LA UNIVERSITAD DE VALLADOLID ALMA EN EL CORAZON DE KASTILLIA OFRENDA A FODELE ESTA PIEDRA ARRANCADA DE TOLEDO EN MEMORIA DELA GLORIA INMORTAL DE DOMENIKOS THEOTOKOPOULOS JULIO 1934" ("The Faculty of History of the University of Valladolid, the soul and heart of Kastillia, offers to Fodele this stone detached from Toledo, in memory of the immortal glory of Domenicos Theotokopoulos. July, 1934") This stone was placed at the village square, under the century-old platan.

View the embedded image gallery online at:
https://www.creteprivatetours.com/points-of-interests/item/36-domenicos-theotokopoulos-el-greco-museum#sigProId495e4e4c0b
back to top