Byzantine and Post-Byzantine Collection of Chania 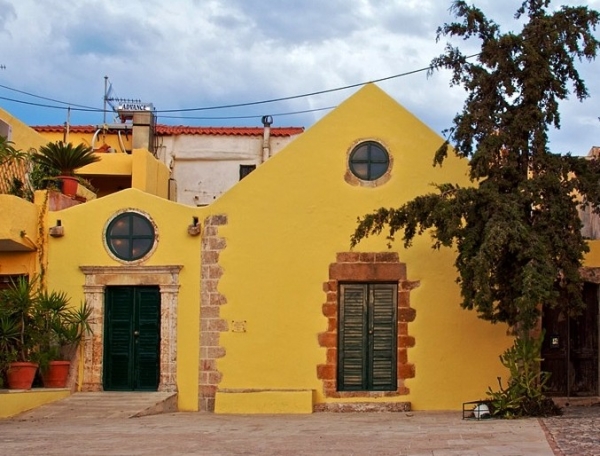 Byzantine and Post-Byzantine Collection of Chania

The Byzantine and Post-Byzantine Collection of Chania has been hosted since 1997 in the katholikon of the Monastery of San Salvatore next to the bastion of the same name on the western side of the Venetian fortifications. On the south side of the monument, the cloister (chiostro), that housed the cells of the Franciscan monks, is still preserved.

The original church, which probably dates to the 15th century, was the small domed section on the east side. This was extended to the west in the following century, following the same type of a vaulted hall with strainer arches. In the mid-17th century the church was extended to the north by the addition of two rectangular rooms with an entrance on the west side. These rooms, in which a limited use of Late Gothic motifs can be observed, were roofed by cross-vaults and communicated with the central nave via large archways. During the period of Ottoman rule the church was converted into a mosque (the Aga Khan Tzamisi) the original church being detached and a sanctuary apse (mihrab) created at the southwest corner of the south aisle.
The Collection includes finds gathered from excavations conducted by the former 13th Ephorate of Byzantine Antiquities, as well as retrieved materials and donations, which provide an outline of the historic and artistic profile of the county of Chania in the Byzantine and Post-Byzantine periods. The objects, strictly selected due to the limited exhibition space available, do not exhaust the subject to which they are related – the dynamic role of the county of Chania prefecture in Byzantine and Post-Byzantine Greece – but they do comprise representative examples of this long historical period.

The objects in each unit are presented in chronological order, and maps and explanatory panels inform visitors about the provenance of the items on display and their historical context. Exhibits are grouped by genre. Each object reflects one or more aspects of everyday life (daily ware pottery, metal lamps), burial customs (items of minor arts, chiefly jewelry that served as funerary offerings; funerary inscriptions), the economy (coins and coin hoards), secular (door frames and coats-of-arms from the Venetian period) and church architecture (column capitals, closure panels, part of a mosaic, wood sculptures), or Byzantine and Post-Byzantine art (frescos, icons).

View the embedded image gallery online at:
https://www.creteprivatetours.com/points-of-interests/item/60-byzantine-and-post-byzantine-collection-of-chania#sigProId54698b670a
back to top