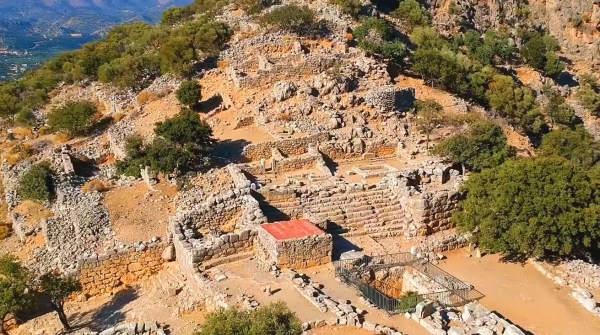 The Archaeological Site of Lato

The urban center of the city-state of the Latians is built in a naturally-fortified location controlling the passage from central to eastern Crete. The city’s visible building remains, which are in such a good state that Lato is considered one of the best-preserved Classical-Hellenistic cities in Crete, belong to the 4th and 3rd c. BC; however, excavation brought to light terracotta figurines and plaques of the 7th and 6th c. BC, and pottery kilns for vases and figurines of the same period. In addition, Late Minoan IIIC pottery found in the area of the ancient city shows that habitation here goes back at least as far as the 12th c. BC. The city was surrounded by a strong wall with gates opened around it. The main and most impressive of these is the one in which a path leading from the entrance of the archaeological site runs through. Entering this gate, the main street leads up the hill to the city’s Agora. On the right side of the street there is a series of buildings identified by the excavators as shops and workshops. On the left there are seven terraces each corresponding to a residence. The Agora, an open area between the north and south acropolises and the east and west residential neighborhoods, has an irregular trapezoidal shape with a Doric stoa on its west and an open platform on its south. Its center is taken up by a small, probably open-air temple of uncertain date. North of the temple was a large underground reservoir, which, by virtue of its location in the residential center and its size, must have been the city’s public cistern. North of the Agora the monumental staircase, also serving as a meeting place, with rows of benches separated into three wings, leads to the city’s

The Prytaneion consisted of a peristyle courtyard on its east and a rectangular hall with a central hearth on its west, which has been identified as the dining-room (estiatorion). At the wide bench (low stone wall) along its walls were formed about eight couches, where the city’s rulers (kosmoi) assumed their place. Apart from dining there, they also received their official guests. The entire architectural complex including the stoa, the stairway, the two towers and the Prytaneion, dates to the second half of the 4th or the 3rd c. BC.

On the slope of the south acropolis one finds the ruins of the city’s large temple (late 4th or early 3rd c. BC). The temple (approx. 4 m high) has a rectangular antechamber on the east and a square cella on the west, where the cult statue was, set on a base preserved in situ. The illegible inscription on its front face does not allow an identification of the deity to whom it was dedicated. Towards the east, a "theater" is formed at a lower level, with straight benches partly cut into the bedrock and partly built.

On the basis of the excavation data and the meager finds, it is clear that the city was gradually abandoned by its residents, who moved down to its port, Kamara (modern Ayios Nikolaos).

According to the preserved epigraphic testimony, the inhabitants of Lato became extremely active politically and diplomatically in the 3rd and 2nd c. BC, taking part in the Knossian coalition and concluding treaties with Gortyna, Eleutherna, Lyttos, Hierapytna, Olous, Miletus and with the Pergamene kings Attalos and Eumenes. Their participation in the treaty of the Cretan cities with Miletus in Asia Minor, and the granting of asylum to the Temple of Dionysus in Teos and its residents shows that the Latians, who like the citizens of other Cretan cities were occupied with agriculture, livestock farming, and commerce, were also engaged in piracy and slave trade.

Nearchus (ca. 360-312 BC), an admiral of Alexander the Great and satrap of Lycia and Pamphylia after the Macedonian king’s death, is believed to have been from Lato.

View the embedded image gallery online at:
https://www.creteprivatetours.com/points-of-interests/item/59-archaeological-site-of-lato#sigProIde5442e3b0e
back to top