The Palace of Malia 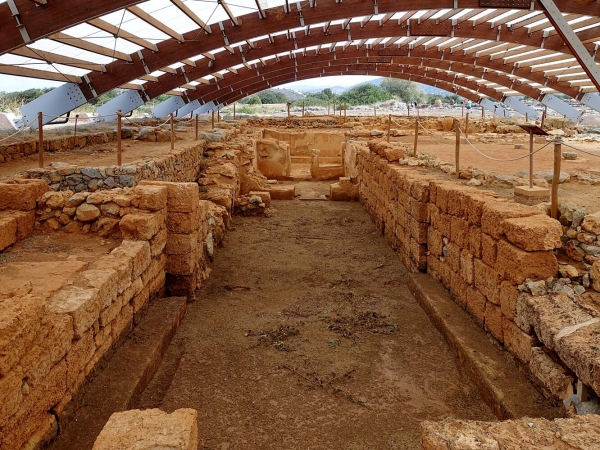 The Palace of Malia

The excavation of the Palace of Malia and its surrounding neighborhoods that begun in 1915 by Iosif Chatzidakis, brought to light a part of its west wing and tombs along the coast and was continued since 1921 by the French Archaeological School at Athens.

The palace complex was initially built in 1900 BC at a site where earlier habitation had been ascertained; it was destroyed in 1700 BC along with the other palace centers of the time. It was rebuilt around 1650 BC at the same site, with the same dimensions and following the same general plan, only to be destroyed once and for all in 1450 BC. Limited occupation has been detected during the Post-Palace period.

The Palace of Malia had a very well thought-out spatial organization. Built around a Central courtyard, it has in each wing specific sectors and spaces with special and discernible functionality. The majority of ruins visible today belong to the Neopalatial complex; on its northwest side, a part of the first palace may be detected.

The biggest and most important part of the palace is the two-story west wing, which included spaces of religious character such as the “Loggia” and the “Pillar crypt”, reception and great events halls, as well as extensive storerooms. A large staircase was leading to the upper story, where the residential rooms for the occupants must have been located. Another large staircase southwest of the Central courtyard, which may have also served as a theatral space, is situated next to the famous kernos of Malia, a ritual vessel with a series of shallow depressions arranged in a circle. The northern and northwestern section of the palace complex was occupied by official rooms. Here, a “Lustral basin”, reception halls, and ritual and banquet rooms have been identified. In the south wing, which was also two-storied, there were rooms for residents and guests, a small sanctuary, and the monumental paved South entrance to the palace. The Hypostyle hall with its six interior pillars that supported the banquet room on the upper floor is located in the north wing behind the stoa of the Central courtyard. The east wing was almost entirely taken up by storerooms for liquids, with low platforms for the pithoi and a system of channels and liquid collectors. In the southwest corner of the palace complex, eight circular constructions arranged in two rows, of equal size and originally covered, were most likely used for grain storage (Granaries).

Quartier M, with a total area of over 3,000 m2, belongs to the Protopalatial period and comprises the largest, best-preserved and most important complex of this period in Crete. Its structures were built around 1800 BC and destroyed by fire around 1700 BC, at the same time as the first palaces and the city’s other districts. In Buildings A and B, which are far larger than normal dwellings, spaces comparable to those of the palaces have been identified: residential rooms, religious spaces, official halls, storerooms. These large buildings were surrounded by seven smaller buildings, five of which have been identified as craftsmen workshops and houses, including those of a potter, a bronze-worker, and a seal stone engraver.

The Sanctuary of the Horns

Southwest and at a short distance from the Palace of Malia was the so-called Sanctuary of the Horns (1800-1700 BC), a semi-underground complex with various spaces, the most important of which was on the northeast side. Its entrance was marked by large horns of consecration made of plaster.

The Protopalatial cemetery at Chrysolakkos, 500 m north of the palace, was a tomb complex with small rectangular spaces that served as mortuary chambers. The famous bee-pendant of Malia was found in one of these.

View the embedded image gallery online at:
https://www.creteprivatetours.com/points-of-interests/item/58-the-palace-of-malia#sigProId0538d316a1
back to top