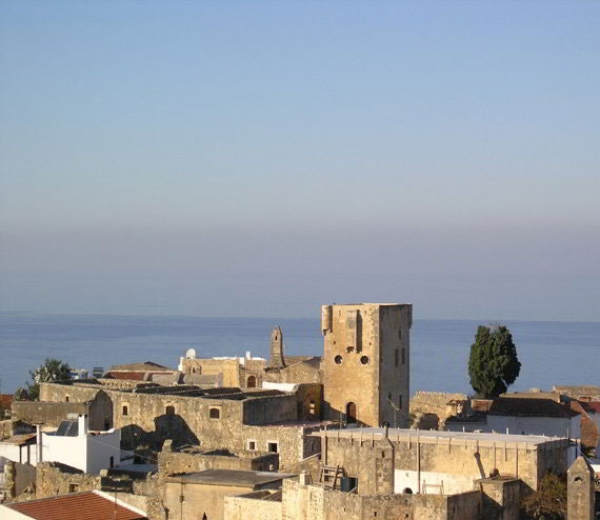 Maroulas is a quiet village situated on the heights above Rethymno, facing the sea at an altitude of 150 meters and surrounded by greenery, a spring and several valleys.

In 1980, Maroulas was listed for its historical monuments but also for some of its houses.

Amongst its rich historical heritage, visitors can discover important remains of ancient tombstones dating back to antiquity, two wonderful Venetian towers one of which is 44 meters high, a Byzantine church dedicated to the Ascension, a more recent church dedicated to the Virgin Mary and lastly a small chapel with iconostasis which adorns the small village square.

During the first Venetian invasions, the middle-class houses of Maroulas were used as second homes or agricultural warehouses by the nobility of Rethymno.

Its high position facing the sea and its narrow lanes without any main square make Maroulas a typical example of the kind of fortifications built at that time.

Inspired by the works of Venetian engineer Fr. Barozzi dating from 1577, the Venetian constructions were aesthetically considered as state of the art.

Later, the Turks would add architectural elements from Anatolia like chimneys, wells, hammams or fountains.

Nowadays, Maroulas reveals itself through a maze of alleys where visitors can stroll, meet with the locals and enjoy its tavernas and cafes.

View the embedded image gallery online at:
https://www.creteprivatetours.com/points-of-interests/item/53-the-village-of-maroulas#sigProIdd5475987d8
back to top