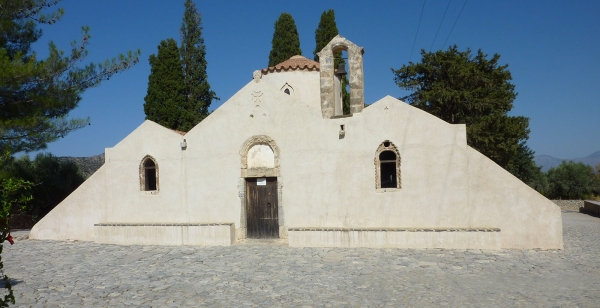 The church of Panagia Kera is located southeast of the small town of Kritsa, a settlement with its own unique profile which played an important historical role. It dates from the Byzantine period, and grew considerably during the period of Venetian rule (1211-1647). One testimony to the vibrancy of Kritsa is the large number of frescoed churches in the area. By virtue of its size and rich fresco decoration, Panagia Kera is the most important of all these churches. The church’s interior was decorated with Byzantine frescos.

The church’s architecture was created by a succession of additions and interventions. The central aisle, which had the form of a domed single-naved church, comprised the original church and was probably built in the Byzantine period. Early in the period of Venetian rule the central nave was restored, the dome was rebuilt, and the side aisles were added. The presence of Venetian influences is shown by the shape of the side aisles’ windows and the dome. In the 16th century, the church acquired pediments on its eastern and western facades, recalling Renaissance prototypes. There are two layers of fresco decoration in the central nave. The first is fragmentarily preserved in the sanctuary niche and the lunettes of the arches supporting the dome.

These scenes are characterized by a linear rendering of their figures, and date to around the mid-13th century. During the first two decades of the 14th century, apparently in the wake of serious damage to the church, the second layer of frescoes was painted; these cover the remaining surfaces of the main nave and dome, with scenes from the Christological Cycle. This layer is characterized by the co-existence of elements from both Middle Byzantine and early Palaiologan art. It was the work of a local workshop that painted other churches in the region. The iconographic motifs are abundant and descriptive, painted in relatively large panels. The scenes of the Last Supper and Feast of Herod are interesting with their depictions of tables laid with food. The western wall is dominated by scenes of men and women in Hell, who form a part of the scene of the Second Coming. The figure of St. Francis on the western face of the northwest pier, rare in Cretan churches, shows the interesting absorption of a Catholic saint into Orthodox iconography. Τhe side naves were painted in the first half of the 14th century, following completion of the decoration of the central nave, and were executed according to different aesthetic principles. The south nave is devoted to St. Anne, who is depicted in the sanctuary niche. The scenes from her life are iconographically enriched by scenes from the Apocrypha and are rendered in a realistic and expressive fashion. The full-figure depictions of holy women (Eirini, Kyriaki, Varvara) that take up the lower zone of the mural decoration are impressive, as is that of St. Theodore Stratelates on the south wall. The movement and dynamism of his horse are reminiscent of ancient Greek aesthetic values. The north nave is devoted to St. Anthony and was painted with frescoes of the Second Coming. The same aesthetic principles were followed here, but the paintings were done by less capable artisans.

View the embedded image gallery online at:
https://www.creteprivatetours.com/points-of-interests/item/50-church-of-panagia-kera#sigProIdd4206a5478
back to top