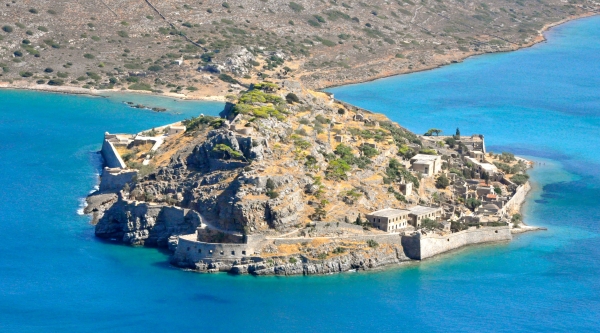 Spinalonga is an arid and barren rocky islet with an area of 8.5 hectares lying at the mouth of the natural port of Elounda in the Lasithi prefecture of Crete. Due to its strategic location, it was fortified and served a variety of roles and purposes over the centuries.

In antiquity the islet was walled to protect the ancient city of Olous. In the late 16th century, the Venetians built one of the most important defensive sea fortresses in the Mediterranean within the context of the major fortification works they carried out to defend Crete.

Construction, based on the designs of the engineer Genese Bressani, began in 1579, and the initial building phase lasted until 1586. Repairs and alterations to the fortress were carried out both before and during the Cretan War (1645-1669). The fortifications consisted of two zones: the first followed the coastline, and the second was founded on the rocky ridge of the hill. Two transverse wall sections, on the southwest and the northeast of the islet, connected the two zones. The Μichiel mezzaluna and Moceniga mezzaluna (or Barbariga), important examples of fortification architecture, were situated at strategic points along the fortifications. During the Cretan War refugees and rebels (haïnides) took refuge here and harassed the Turks, using the islet as their base. With the treaty of the surrender of Candia (1669), Spinalonga remained a Venetian possession. In 1715 the islet was surrendered to the Turks following a siege. The Venetian garrison withdrew, and the remaining 600 or so inhabitants were taken prisoner.

Muslims settled on Spinalonga from 1715, and they built their houses atop the foundations of Venetian buildings. The Muslim settlement was initially isolated and inaccessible, with around 250 inhabitants in the early 19th century. After the mid-19th century, the settlement experienced a heyday accompanied by urban development. In 1881, the resident population reached 1,112 and the island operated as the largest Muslim trading center of Mirabello. The settlement’s buildings developed incrementally throughout the western and southern sides of the islet. In the late 19th century, it is estimated that there were around 200 residents on Spinalonga and 25 shops or workshops. A fair number of well-constructed two-storey houses and shops continue to be preserved today. Their building’s plasticity and symmetrical proportions recall the principles of local and Balkan architectural traditions. In 1903, the Cretan State established a leper colony on the island; its first 251 patients settled there in 1904. Originally, lepers coming only from Crete were deported here. But after 1913, when the island became part of Greece, lepers from the rest of the country also came to Spinalonga. The state was obliged to provide an allowance to each patient. The leper colony had a physician-director, nursing personnel, caretaker, financial department, and a priest. The ill resided in already-existing buildings in the settlement as well as in modern buildings constructed during the 1930s. Patients lived independently in their own space, and were responsible for earning their livelihood. The limitations imposed by the regulations and the objective difficulties of their life of pain did not weaken their desire to live. They organized their space, engaged in cultivation of the land, fell in love, married, and had children. Building activity by the leper colony brought drastic interventions to the settlement’s buildings and the fortifications. In 1939, large sections of the fortifications were demolished by dynamite to make way for the road around the islet.

After the leper colony closed in 1957, the islet remained desolate and uninhabited. Spinalonga’s use as a place of confinement for lepers, who experienced the reality of death in isolation and desertion, had stigmatized it. The name “Spinalonga” became synonymous with suffering and acquired symbolic meaning.

View the embedded image gallery online at:
https://www.creteprivatetours.com/points-of-interests/item/49-spinalonga-island#sigProId8ed344ed28
back to top