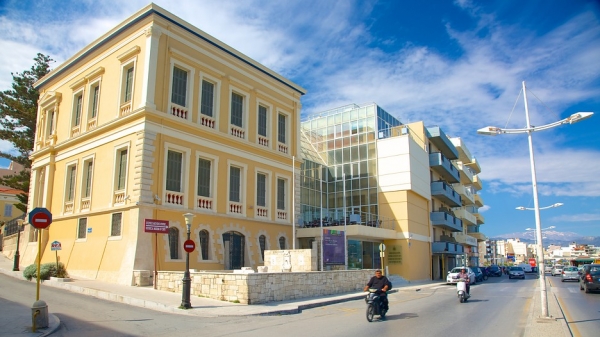 The Historical Museum of Crete was founded in 1953 and is housed in a neoclassical building of exceptional architectural merit. A multi-faceted museum narrating seventeen centuries of history on Crete, from Early Christian times to the modern era. The exhibition is much more than a mere display of artefacts. Throughout the museum, visitors interact with new media.

The meeting ground of the monotheists: Christians from the East and West, Arabs, Ottomans and Jews come together on Crete. The exhibition includes Byzantine, Venetian and Ottoman sculpture and ceramics. Added to these are frescoes and portable icons, coins, jewellery, maps and the large model of 17th century Chandax.

The eventful birth of national consciousness on a large Mediterranean island. In addition to flags and weapons, the exhibition includes items of everyday use from the turbulent 19th century period; portraits and photographs of leading figures in modern history: archive material and artefacts from World War lI and the Battle of Crete.

Two early paintings by The Museum of Domenicos Theotokopoulos (El Greco) - at the halfway stage in his journey from East to West. The finest exhibits are, “The Baptism of Christ” (1567) and “View of Mt. Sinai and the Monastery of St. Catherine” (1570), the only works by the artist now on Crete.

The writer and the politician

Life in rural Crete during the 19th and early 20th centuries. The exhibition includes costumes, jewellery, musical instruments, weavings and minor objects, together with a reconstruction of the interior of an old Cretan village house.

Temporary exhibitions are also held; films are shown in the Small Amphitheatre.

The Museum has an audio guide system, a café and a shop.

View the embedded image gallery online at:
https://www.creteprivatetours.com/points-of-interests/item/48-historical-museum-of-crete#sigProIdf28221d5ae
back to top