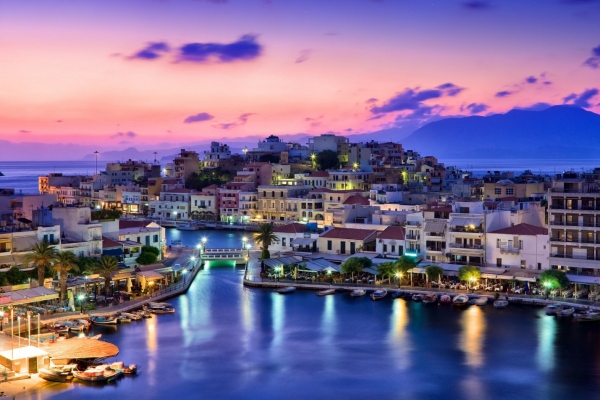 The city of Agios Nikolaos is built on the location of the ancient "Lato pros Kamara - port of Lato Etera". Both towns formed one administrative unit, which flourished during the 3rd century. Both worshipped goddess Elithyeia (goddess of childbirth) and they had the same coins - with Elithyeia or Artemis (Diana) on one side and Hermes Lation on the other - as well as their own economy. The Latians, contrary to other towns, which were almost constantly in war with other cities, were in good terms with their adjoining cities of Elounda, Driros, Milatos and Minoa. There is not enough reference about the Byzantine period. During the Venetian occupation (1204-1669) Genoan pirates built a castle on top of the Kefali hill (prefecture hill), which was renamed by the Venetians to Merabello and gave its name to the whole region. The castle has been destroyed by the earthquakes and burnt during the pirate raids. The city of Agios Nikolaos has been thrust aside during the years of the Turkish occupation and was reinhabited in the 1860's by fugitives from Sfakia, from Kritsa and other Cretans. In 1881 it was a small picturesque village of few people and in 1900 had 500 inhabitants. However, in 1905, it became the capital of the province.

Agios Nikolaos was named after the small Byzantine church of Saint Nicholaos, which is located next to the "Minos Palace" hotel. The church is carefully preserved.

The Archaeological Museum. The museum is situated on K.Paleologou St. , almost 400m away from the bridge and houses real treasures of the Minoan and the other periods of the history of eastern Crete.

The Popular Art Museum. Located next to the bridge at the beginning of K. Paleologou St., houses marvellous objects of the popular artcraft of the area.

Agios Nikolaos is the capital of the Prefecture of Lasithi, is one of the most highly developed tourist towns in Greece.

Agios Nikolaos is the administrative, communications, cultural and commercial center of the Prefecture, with approximately 8500 inhabitants.

The sea in Agios Nikolaos is superb and the surrounding area of the city is noted for its sandy beaches and beautiful bays - Kitroplateia, Ammos beach, EOT beach and Ammoudi are within walking distance from the city center.

The landmark of the city is definitely the small lake, known as "Voulismeni" that is located in the center of the city, at the foot of the cliffs. Its shape is circular with a diameter of 137m. According to the mythology, the goddess Athena used to take her bath in this lake. The depth of the lake is 64 m and was connected to the sea only recently, with a canal opened at 1870.
It is an especially picturesque site with many open-air cafes and restaurants along the bank.

View the embedded image gallery online at:
https://www.creteprivatetours.com/points-of-interests/item/39-agios-nikolaos-city#sigProId0272323d98
back to top