Geography of the Island

It is the largest of the Greek islands, and fifth in size among the islands of the Mediterranean, after Sicily, Sardinia, Corsica and Cyprus.
Its maximum length is 260 kms. from the Gramvousa point in the northwest up to the Sideros point in the southeast, while its width varies from 60 kms. to 12 kms. Its area is 8.261 sq.kms. and together with the islets of Gavdos and Dia, 8.303 sq.kms. The length of its coastline is 1.046 kms.
Crete is a mountainous island, with three large ranges: the White Mountains or Madares in the western part of the island (highest peak: Pachnes-2.453m.), Mt. Ida or Psiloritis in the central part of the island (highest peak: Timios Savros, 2.456 m.) and Dicte or Lasithi mountains, which dominates the eastern part of Crete (anonymous peak of 2.148m.)

A particular characteristic of Crete is the existence of many caves, which were formed as a result of the karstic effects, through the ages, of water on the limestone rocks. Most of these have been known since prehistoric times and were used as places of shelter and of worship, as is proved by the various finds brought to light. The most important of these caves are: the Dictaean Cave (on Mount Dicte near Psychro village), the Idaean Cave (on Mount Ida near the village of Anogheia), the Melidoni Cave in the province of Apokoronou (near the village of the same name), the cave of Omalos in Chania province and the Sendoni Cave in Rethymnon province.

Another particular interesting phenomenon which is characteristic of the island is the formation of gorges which, starting from the mountains, reach all the way to the sea and cut deeply into the land of Crete. The best known and the largest is the Samaria Gorge in the Chania prefecture. 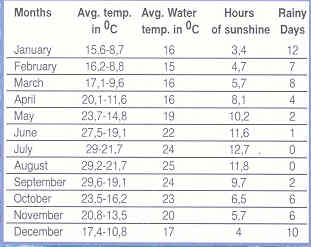 Deep in the gorges and in the most remote parts of the island, far from human activity and the jarring interventions of science and technology, a rare and rich plant and animal life still survives, extremely worthy of study and interest.

The climate is gentle and healthy, with mild winters and hot summers in the coastal areas and plains, while in the mountains the winters are quite harsh.

Administratively, Crete is divided into four prefectures: Heraklion, with Heraklion town as its capital, Lasithi, with Aghios Nikolaos as its capital, Rethymnon, whose capital is the town of the same name, and Chania, with its capital, Chania.

Published in Creta Guide
back to top